You are here: Home / Book Format / eBook / Forever in Your Embrace by Kathleen E. Woodiwiss 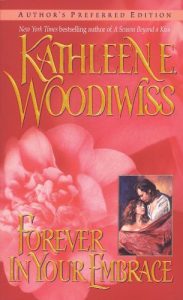 On a dark and dangerous road, a daring British adventurer saves the life of a countess of royal blood. In all his travels, Colonel Tyrone Rycroft has never encountered a woman as breathtaking, alluring, and inscrutably mysterious as the bewitching Synnovea. But his selfless bravery has drawn him into peril — and into an inescapable web of intrigue and seduction.

In an opulent and treacherous imperial court, the proud, headstrong lady′s dashing champion has become a pawn in a dangerous game of power and influence — and only his great courage and wits will enable him to survive it. But Rycroft′s enflamed desire will not let him escape to the safety of his own world — not until his dream is realized, and the enigmatic, highborn beauty has given herself to him freely, honestly, and forever.

Get Forever in Your Embrace by Kathleen E. Woodiwiss at Amazon