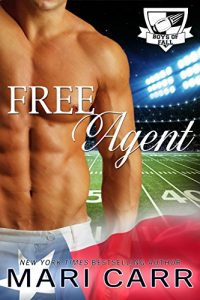 Tucker had only one aspiration in high school – to get the hell out of town the second that diploma was in his hands. The only way out was his talent as quarterback on the gridiron. And his plan worked. He turned pro his sophomore year of college and never looked back. Never had any regrets.

Except her. Lela and Tucker’s romance had been like a force of nature – steamy, unstoppable and tempestuous. He had always turned to her to forget about how bad things were at home, but when things took a turn for the worse, he broke it off and ran. For twelve years he stayed far away, unwilling to deal with his drunken father, his mother’s death, and unable to face the girl he never stopped thinking about.

When Tucker gets a call that his high school coach has suffered a heart attack and needs help, he has to make a decision. Does he return with his teammates to help his beloved coach? Does he take the risk of running into his father? What does he say to Lela about the way he disappeared so completely?

And what if the spark that flared so hot between them still exists?

Get Free Agent: Boys of Fall by Mari Carr at Amazon