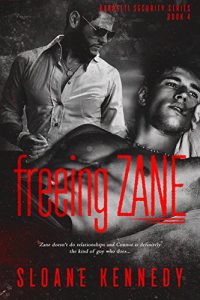 Criminal defense attorney Zane Devereaux is on the verge of having everything he’s worked his entire life for. He’s on track to become his firm’s youngest managing partner and he has enough money in the bank to ensure he’ll never have to be at the mercy of anyone ever again. He’s left his past exactly where it belongs and refuses to look back. And he sure as hell isn’t going to risk a repeat of his former mistakes by letting someone as sweet, sexy and endearingly vulnerable as Connor Talbot into his life. His bed maybe, but not his life.

Connor Talbot has no regrets about serving his country, even if it did cost him more then he’d imagined. Two years after an IED took his leg and left him with permanent brain damage, Connor is still struggling to put his life back together, but he’s managed to find a makeshift family in Seattle that helps ease the pain of losing his own at a young age. Unfortunately, a string of bad relationships and an abusive ex have taken their toll on Connor and he’s given up on finding the lifelong partner he’d always envisioned he’d have. But a chance encounter with a man he has absolutely nothing in common with except for an intense, white-hot chemistry has him thinking that maybe a no strings, physical relationship is exactly what’s called for.

What begins as two men meeting each other’s needs between the sheets turns into something neither one was prepared for but the wounds of the past run deep and both men will have to decide if a future together will cost them too much or if what they could have together is worth fighting for.