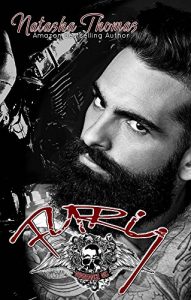 One loss too many. One woman to heal his heart. But is it enough?

Tanner ‘Fury’ Scott has suffered tragedy after tragedy at the hands of many during his thirty-six years of life, and he’s had enough. Beaten, broken, and scarred, Fury is sure he can’t take anymore. But when all seems lost, a glimmer of hope by the name of, Avery shines through the darkness threatening to overtake him.

Avery Tamara Philips grew up under the watchful eye of her father and his MC knowing the dangers that lurked behind every corner. But never in her wildest dreams did she expect to be a casualty of the violence and brutality that existed just beyond the safe haven of the clubhouse walls.

Lost and alone, two souls fighting to survive through extraordinary circumstances, Fury and Avery have to decide whether they can come together to pick up the pieces of their shattered hearts, or are they just too damaged they never stood a chance.

In a world with no certainties, filled with choices that will ultimately alter the course of their lives one thing is absolute – love conquers all. And when all else fails, sometimes love is the only thing left to hold on to.

***Please Note:*** This book is intended for mature readers over the age of 18. It contains coarse language, explicit sex scenes, violence, and content that some readers may find offensive some readers.

Get Fury: Book 2 in the Vengeance MC series by Natasha Thomas at Amazon