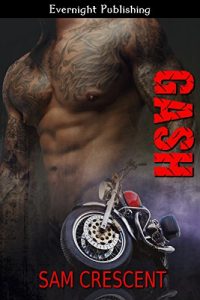 Seven years ago, Gash was sent to prison on false rape and murder charges. He put the club first, but now it’s time for him to get his revenge. There’s one woman from his past who may have all the answers: Charlotte. But is she also to blame for his imprisonment?

From the first moment Charlotte saw Gash, she fell in love with him. He was a hardened biker, but she saw something inside him that touched her heart. Now time has damaged both of them, and neither is the same. As they dig deeper into the past, Gash realizes Charlotte is not guilty and was hurt, too, by his enemies. Revenge matters even more now, for her sake, and now that Charlotte is in his life, he’s not going to let her go.

When their enemy’s identity is revealed, will Gash risk Charlotte’s life, or will he let Master go to protect the woman he loves?

Get Gash (The Skulls Book 13) by Sam Crescent at Amazon