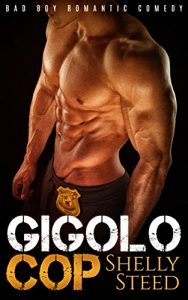 When Dirty Cop, Officer Pladis, isn’t beating up thugs or planting evidence on them, he’s moonlighting as a Sexy-as-Hell Gigolo-for-Hire… With his Greek God-Like Physique, Chiseled Jawline, and Electric blue eyes, the Handsome Son-of-a-Bitch has no problem getting wealthy women to pay him for sex… But he’s met his match in Feisty Defense Attorney, Elizabeth Kudrow…

After Seducing Her, Ripping Her Off and Framing Her Hitman Client, the Vexed Power Lawyer is on the War Path and has set the perfect trap to Nail His Cocky Ass in Open Court… Sure, Officer Pladis may be Easy on the Eyes, but she’s a Woman-Scorned and is gonna make him pay for F*cking Her Over! … At least that was her plan, until the Assistant D.A. springs his own little surprise, and All Hell Breaks Loose!

With the Bullets Flying and her very Life in Danger, Elizabeth soon finds herself turning to the Bad Boy Cop who ruined her. And before long, she learns firsthand why women pay a premium for his Gigolo Services when she enters into a Very Kinky Arrangement with him…

Having called the shots-in-bed and controlled all of her boyfriends in past, the last thing the Self-Subscribed A-Type Personality like her thought she’d ever do was submit to a man, and call him “Sir”. … Especially someone who she hates so much. But before long, she begins to crave him ordering her around, manhandling her in bed, and reminding her just who’s-in-charge with regular spankings.

Spiraling down a dark trail of Kinky Seduction, Awakening her Inner Goddess, Elizabeth knows she shouldn’t develop feelings for her Dirty Cop, but sometimes Love’s a Bitch, & you just have to follow your heart!

Get GIGOLO COP by Shelly Steed at Amazon