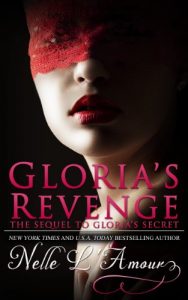 Why hadn’t I resisted him? Because he was too strong, too determined, too beautiful. And because I was hopelessly, helplessly head over heels in love. He had made me fall apart and fall for him.

Brought to new heights of sensuality and passion, Gloria Long, the stunning, self-made CEO of Gloria’s Secret, the world’s largest retailer of lingerie, has succumbed to the seductive spell of sexy, dominating billionaire ad guru, Jaime Zander. But the man whose first name means “I love” in French is a player and may be incapable of love. And involved with someone else.

Back at her Los Angeles headquarters, Gloria faces unexpected deceit, intrigue, and danger and must make a heart-wrenching life-or-death decision that will cost her not only her empire but also the man she loves. Revenge is the only solution. But will she find the strength to confront the demon from her past who harbors the dark secret that can shatter her world?

This steamy and suspenseful sequel/conclusion to Gloria’s Secret is intended for mature readers 18+.

Get Gloria's Revenge (Gloria Book 2) by Nelle L'Amour at Amazon