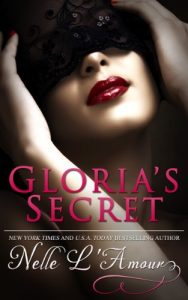 A man who has never heard the word “no,” Jaime takes his creativity to the limit to make Gloria fall apart and fall for him. But major obstacles stand in the way–Gloria’s Secret’s ruthless Chairman, who covets Gloria and is out to destroy Jaime, as well as his manipulative sexpot daughter, who wants both Gloria’s job and her hot, new love.

Complicating matters further, Gloria harbors a dark, horrific secret, that when exposed, will shatter both her empire and her life. Will she be able to have it all or will the walls come tumbling down?

This full-length adult novel concludes with the steamy and suspenseful sequel, Gloria’s Revenge, but for those who want more of Gloria and Jaime, their passionate love story continues with Gloria’s Forever.

Get Gloria's Secret (Gloria Book 1) by Nelle L'Amour at Amazon