You are here: Home / Genre / Action / Going Down (Divemasters Book 1) by Jayne Rylon 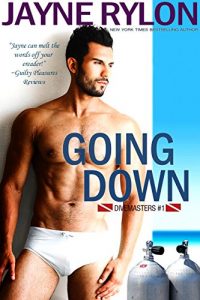 Three SCUBA instructors, are about to take the ultimate plunge. If you’re extraordinarily lucky, you’ll be invited to join them on The Divemaster, where work and pleasure go hand in hand. Welcome aboard!

Archer Banks relishes his carefree lifestyle. Together with friends and fellow divemasters Miguel Torres and Tosin Ellis, he travels the world, SCUBA diving by day, entertaining lonely female tourists by night. Until his father dies, instantly transforming Archer from a beach bum to a billionaire by shackling him with an enormous, undesired inheritance.

With the help of his family’s longtime butler, Archer is determined to turn his new golden handcuffs into a golden opportunity. He prays Miguel and Tosin will come along for the ride when he repurposes his family’s mega-yacht into a vessel well-suited for both work and hardcore play.

Never in his worst nightmares does he expect their maiden voyage to be such rough sailing. Not only is Archer’s old crush, Waverly Adams, among their passengers, but the men have also stumbled upon a vast sunken treasure—one worth killing for.

Waverly surprises Archer with an alluring naughtiness he never got the chance to experience in their younger days. Busy accepting the challenge she issues his dominant side in The Divemaster’s onboard club every night, he might be distracted and short on sleep. But could he also be blind to more dangerous facets of her personality?

When the divemasters can no longer deny there’s foul play at hand, will Archer be going down with the ship, cursed by his family’s fortune, or will Waverly turn out to be the woman of his most wicked dreams?

*This is a standalone novel set in the Divemasters world*