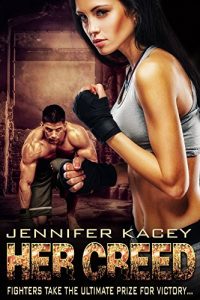 Underage KC snuck into the underground fight club called The Cage. But it was no ordinary fight club. The participants didn’t battle for titles or a useless belt to collect dust. The men and women brawled for only one thing. To be the victor and take the spoils of war they’d earned with their blood, sweat and tears. Not for money or jewels. They fought for the right to take the loser in any way—and any hole—of their choosing.

But KC was discovered by one of the bouncers and taken to a room with no way out. To the office of the owner, Creed, who held more than just her fate in his hands…

He’d seen hundreds of warriors find their way to his door with visions of grandeur and conquest. But it took a girl not yet a woman to remind him why he worked so tirelessly day in and day out. Her eyes. They would haunt him long after he threw her out of his arena and told her never to return.

Years later, they meet again, and KC is ready to take her place amongst his fighters. Creed wants nothing to do with the woman she’s become, but their fate has an interesting way of setting things right.

Get Her Creed by Jennifer Kacey at Amazon