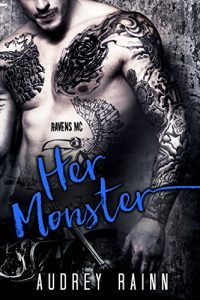 She calls me a monster. And she ain’t wrong. In more ways than one.

SEVERIAN
I don’t do relationships. Or dates.
Hell, I don’t even like to kiss. I let women worship me and then it’s on to the next.
Then Nemmi limps into my town, looking battered and broken. One look at her and you can see she’s walked through hell.
My MC, The Ravens, they’re in tatters. The leader’s on his deathbed. There’s a sick f**k killing our old members.
But all I care about is Nemmi. I want to murder every son of a b**ch that’s ever hurt her. I want to make her scream my name.
And I’m gonna make her mine.

NEMMI
Severian’s one of the largest men I’ve ever seen. His tall frame is thick with rippled muscles and tattooed skin.
He may be a monster, but he’s my monster.
I need his protection. I need his strength. I need him.
There’s only one problem.
I’m the one murdering his club members.
It’s only a matter of time before my monster turns on me.

Her Monster is a full-length, standalone novel with a happily ever after and NO CLIFFHANGERS. It’s for readers over 18 due to strong language, violence, and sexy scenes. There are dark, disturbing themes and extreme sexiness that may be uncomfortable for some readers.

Get Her Monster: Ravens MC by Audrey Rainn at Amazon