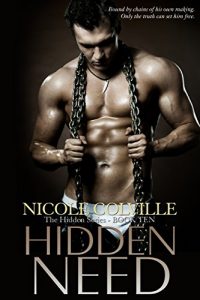 Hidden Need can be read as a standalone book, or as an introduction to the series

Mario has to break free from the chains which he has tightly bound around him. Every year more links to his chain are added. Every year they become harder and harder to carry. He has hidden for too long, and the pain of living a lie has driven him to the lowest depths he can fall.

An alcoholic at twenty six, he has to get his life back and re-build the bridges he has burnt. He’s pushed everyone away. He has no one left who cares about him. No reason for living, except maybe one thing, or one person.

The only thing that gives Mario hope is Luca, the object of his desires for the last five years. A former friend who he hurt badly. Getting sober and back into shape is all for the love of him. The only thing is, Luca isn’t gay. Or is he?

Two men who both have dark pasts. Two men who want something they can’t have. Two men who need each other so powerfully it tears them in two.