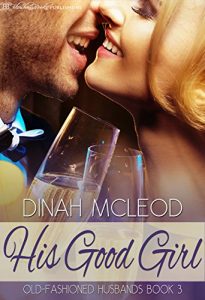 Twenty-two-year-old nurse Cara Jones isn’t looking for love when she just happens to meet the man of her dreams. But Kevin Sims is everything she’s ever wanted; cute, smart, funny, and very much in love with her. His desire to have and maintain a traditional relationship—which includes taking her over his knee when she deserves it—catches her off- guard, but even that is something she feels able to benefit from.

After a whirlwind romance with the handsome, alpha-male chef, Cara is eager and delighted to accept his marriage proposal, and her happiness is further cemented when she meets Kevin’s parents and sister. Having only a strained relationship with her own mother, and no other relatives, she’s overjoyed at the thought of meeting her future in-laws and joining the Sims family.

Unfortunately, things aren’t always what they seem. Kevin has been keeping a big secret, and it’s not long before Cara begins to suspect that perhaps they should have waited before getting married. Her new sister-in-law, too, seems determined to drive a wedge between the newlyweds.

Can Cara and Kevin sort out their differences and rediscover their deep mutual love and attraction before it’s too late? Will they be able to confront and overcome the circumstances and insecurities forcing them apart? Does Cara have it in her to become Kevin’s good girl?