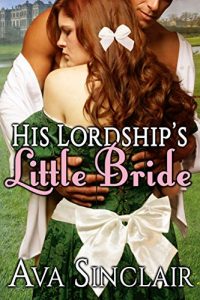 Eighteen-year-old Lady Amelia Chesterfield’s willfulness has caused great consternation for her parents over the years, but they are nonetheless taken aback by her appalling and indecent response to their attempts to marry her to a man of their choosing. The scandal which ensues as a result of Amelia’s wanton behavior seems certain to complete the ruin of her family’s already tattered reputation, and thus it comes as a shock to the entire household when Garrett Darmley, the heir to the richest estate in the region, makes his own offer of marriage to Amelia.

Garrett is no fool, and he has his own reasons for his proposal. He has long known that he wants and needs a woman who can be not only his wife, but his little girl as well, and Amelia will fill that role perfectly. Her rebellious nature will afford him plenty of opportunities to bare her bottom and spank her soundly before taking her in his arms to comfort her, and if she persists in her defiance his young bride will soon discover that there are punishments which are far more painful and embarrassing than a mere spanking.

Though her new husband’s treatment of her is shocking at first, as Amelia settles into her new life as his little girl she finds herself feeling loved and accepted in a way she never dreamed of before. His total command of her body soon leaves her yearning for his touch, and as his masterful lovemaking brings her to one quivering, blushing climax after another, her passion for him burns hotter every day. But when enemies within Garrett’s own household seek to harm Amelia, will the scandal and disgrace she hoped to leave behind return to plague her once again?