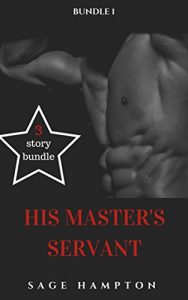 Nineteen year old Lyam Collins has had a tough life. Growing up in an orphanage and then being sold into servitude hasn’t given him the best start. So when he’s offered the opportunity to better himself, he takes it with both hands.

Should he agree to become the personal servant of rich landowner Julian Sackville, he could receive all the riches and comforts he could ever want for. But Julian has very specific requirements of his servants.

Lyam must learn both discipline and control at the hands of his master, and Julian is a strong believer in domestic discipline. And that discipline doesn’t always happen in a domestic setting.

Follow as Lyam begins his journey towards true control in the first three volumes of His Master’s Servant: Owned, Taken, and Control, all contained in this one bundle.

Lyam wants to learn, but does he really have what it takes to become his master’s servant?

Get His Master's Servant: Bundle 1 by Sage Hampton at Amazon