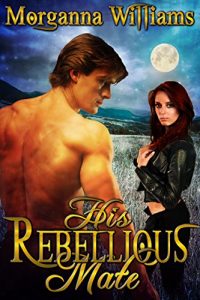 Nineteen-year-old Maggie Treenan, the youngest daughter of a human mother and a Ramelian commander, is certain that her brothers’ best friend, Jackson Marks, is destined to be her mate. Unfortunately for Maggie, however, Jackson sees her as nothing more than a sweet but silly girl, and when she throws herself at him to convince him otherwise she only manages to earn herself a stern scolding and a painful, embarrassing bare-bottom spanking.

To make matters worse, his chastisement triggers her mating fever just before he leaves Earth to return to his post with the Ramelian Guard. Heartbroken and overwhelmed by her unmet need for the man her body knows full well is her mate, Maggie spends the next eight years running a biker bar, riding motorcycles, and doing her best to forget about Jackson.

When he returns to Earth at last, it doesn’t take long for Jackson to figure out what has happened. Realizing how difficult it must have been for Maggie to live for all those years with the fierce, inescapable lusts of her mating heat—lusts that only he can quench—he sets out to claim her properly and make things right as soon as possible.

But Maggie has grown into a feisty, headstrong woman, and Jackson soon realizes that taming her is going to be no easy task. He will need to be loving, but he will also need to be firm, even when that means punishing her thoroughly for her stubbornness. Will his rebellious mate learn to submit, or will she find herself spending most of her time with blushing cheeks and a bottom that is sore both inside and out?

Get His Rebellious Mate by Morganna Williams at Amazon
Get Audiobook