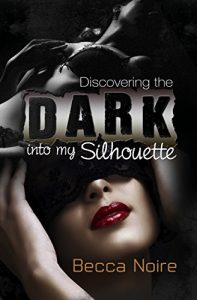 After years toiling away as a working mom, Becca is about to have an empty nest—and she’s ready to have some fun. The only problem is that every man she meets bores her to tears… until John.

John is sophisticated, dominant, and undeniably sexy. And he doesn’t waste any time bringing Becca into his world: a world of secret societies, unbelievable wealth, and sex that leaves Becca panting, desperate for more. He asks her to relinquish control to him and when she does, his voyeurism ignites her passion, and his love of bondage takes her to a whole new level of sexuality.

But Becca’s new friends are more than just a group of billionaire swingers. Their club is about vying for ranking and privilege, about seeing and being seen. About status and power. And when they show Becca the dark underbelly of her new life, she’ll be forced to make a choice between her conscience and her heart.

Get Into My Silhouette: Discovering the Dark by Becca Noire at Amazon
Get Audiobook