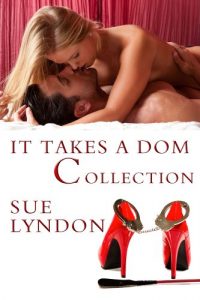 Breaking His Rules – Amanda has always ignored the attraction she feels for her strict boss, Mr. Mizenov. He’s a bit mysterious and holds everyone at a distance, and she doubts she has a shot in the dark with him anyway. He begins to treat her differently though after she forgets her ereader at work one evening, and she suspects it’s because he’s spied the titles of the spicy book she enjoys – particularly the book she’d had open at the time, Spanked and Dominated by the Boss. Yikes. Talk about embarrassing. Even worse, she’s a virtual kink-virgin in real life, and when Mr. Mizenov threatens to spank her if she’s a mere minute late for work, she has to make a choice. To be on time…or to be naughty?

Christmas with the Professor – Angela can’t stop fantasizing about her former Psychology professor. Dr. Taylor’s commanding presence brings out the submissive girl inside her, the girl she left behind after her last Dom cast her aside. But is Dr. Taylor kinky? When she shows up at his house with fresh-baked cookies, she attempts to tease the Dom out of him and gets much more than she bargained for – her heart softens to a man for the first time in years. She flees for the safety of her apartment expecting to spend the holidays alone licking her wounds. When an unexpected visitor comes knocking on Christmas morning, will she slam the door and continue to guard her heart? Or will she open herself up to a new year of possibilities?

Tessa’s Submission – One taste of passion and play isn’t enough for Tessa, and it’s not enough for Richard either.

Valentine Submission – Sparks fly when Anne, recovering from a recent divorce, spends a few weeks at a bed and breakfast owned by her ex-husband’s friend. Jack is a widower, and a dom, who hasn’t let another woman close since his wife died three years ago. He can’t deny his feelings for Anne, but as their passion flares, the complications of a long distance relationship arise. Will either of them find happiness again?

Snowed in with Santa – Jared’s wife couldn’t handle his kinky side. Will his dark desires scare his new, much younger, co-worker away too? There’s only one way to find out…

Get It Takes a Dom by Sue Lyndon at Amazon