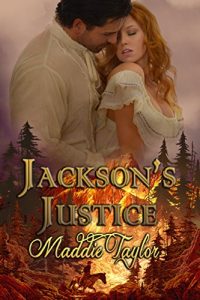 Twenty-year-old Jenny Harper has been in love with Heath Jackson since the day she saw him leap from a galloping horse to save an old woman when she was eleven years old. Over the years, Jenny has watched the women swarm around Heath, but she has her heart set on him and she is not one to give up easily. One way or another, she will show Heath she is a grown woman, ready for a husband, not the child he remembers tagging along after his younger brother.

Unfortunately for Jenny, ever since he was left at the altar by a foolish girl who ran off to marry a wealthy old man, Heath Jackson has sworn off marriage, preferring instead the company of widows and saloon girls. And in any case, though he has secretly lusted after her for years, as far as Heath is concerned Jenny is too young, too much like family, and too eager to wed.

But when tragedy strikes, putting more on Jenny’s shoulders than she can bear, her only hope of saving her family home lies in marrying quickly. Can Heath sit back while other men vie for her affections? Can he bear to watch in silence as she chooses a weakling when she desperately needs a strong man like him, one who will keep her safe and give her the sound discipline she needs when her impulsive ways place her in danger? Or will he stand up and claim what should be his, even if it means risking his heart again?