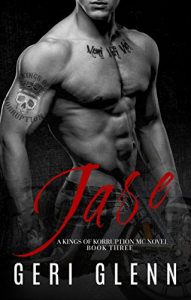 He’s a player. She’s a single mom just trying to keep her head above water.

Jase is a ladies’ man, and a smartass with a talent for finding the humor in any situation.

He’s had his eye on Ellen for a long time, but she’s made it more than clear that she’s not interested. She has no intention of ever being the butt of his jokes or a notch on his bedpost. Too bad for her, Jase doesn’t give up that easily.

Between the war his club is going through and Ellen’s asshole ex, the hits just keep on coming, and their world is about to spin out of control.

Jase is the third book in the Kings of Korruption MC series. You do not need to read the other books to enjoy Jase.