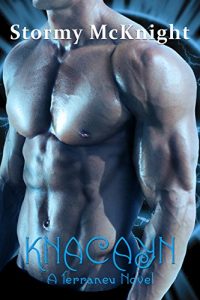 Knacayn is the seventh in the Terraneu series of Science Fiction Romance novels.

Makenzie Kincaid is a survivor. Orphaned at a young age, she is pushed into serving The Rebel leadership in order to gain power and standing in their tight-knit community. Her whole life has been spent in that service, turning her into a hardened diplomat. Three months ago, she helped save a Government faction prisoner, and now her life, as well as every life on Earth, is changed. The prisoner was no ordinary male and his family is no ordinary family. They are from Terraneu and they have given her community of survivors a chance at living again, not just surviving, on Earth. The rebuilding has begun. Kenzie is the liaison between her people and Terraneu. The only thing making it interesting is Knacayn. The most annoyingly persistent, hard-headed, sexy male she has ever had to interact with. How can she serve her community, as much as they question the males of Terraneu, and get closer to Knacayn? Does any of it matter that he must return to Terraneu and she will be staying on Earth? Even if she could get him to agree to a casual relationship, which for a male of Terraneu is close to impossible. Would he agree to let her see other men while he was gone?

Knacayn may have grown up on Terraneu but that doesn’t mean he hasn’t faced hardship. His insane uncle tried to destroy his entire community, his sister was kidnapped and held hostage, and his brother was taken prisoner and tortured on Earth. To give the council, (his mother, father, aunts, uncles and adopted uncles), some peace, Knacayn has offered to be the Terraneu contact for both the Rebel and Government factions of Earth. No easy task given that the two groups hate each other.Want nothing to do with any of the males of Terraneu, and just plain nitpick the smallest details of any decision. The only light in the whole process is Kenzie Kincaid. From the moment she hip bumped him, he has fallen for the sassy diplomat. He only has six months on Earth before he has to return to Terraneu. Even if he wanted to stay, and Kenzie was a powerful motivation to try, the one sun of Earth is not enough to sustain him.

Little do Kenzie and Knacayn know that life is about to take another crazy turn that neither of them could have predicted.

This book has some steamy scenes and is meant for the mature reader.

Get Knacayn: A Terraneu Novel (Book Seven) by Stormy McKnight at Amazon