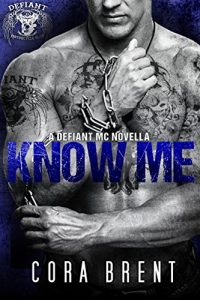 As the daughter of the Coast Devils MC President, Kira Tolleson was raised around dangerous men. But her father, Crest Tolleson, always took pains to keep Kira out of the violent chaos surrounding the club.
When a rival gang massacres the Coast Devils, including Kira’s father, she knows their brutality will not spare her if she is found.
In desperation Kira flees to the Arizona desert to find the one man who might help her.
His name is Orion. As leader of the Defiant MC, he is tough, explosive, unbearably sexy.
And once, he was her father’s best friend.
Confronted by the innocent young woman he’d known long ago, Orion agrees to take her in.
That is, if Kira is willing to meet his terms…

**Warning: This is a novella and contains violence and explicit sexual situations which may be objectionable to some readers. Not recommended for anyone under the age of 18.**

Get Know Me by Cora Brent at Amazon