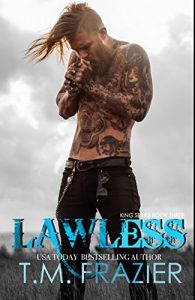 Thia’s lost it all. With no options left she turns to the biker she met as a kid to cash in the favor he swore to return all those years ago.

Bear’s best friend is dead. His old man wants to put him to ground.
He has bigger things on his mind than the pink-haired girl from the
gas station he never thought he’d see again.

Until her battered body is tossed onto his doorstep.

Keeping his promise to Thia means Bear has to be willing to risk everything, including his life…and what’s left of his heart.

Thia’s bruised and battered.
Bear’s leather and lawless.
It will never work between them.
It’s a lie they ALMOST believe

LAWLESS is book THREE in the King Series and meant to be read after KING & TYRANT.

Get Lawless (King Series Book 3) by T.M. Frazier at Amazon
Get Audiobook