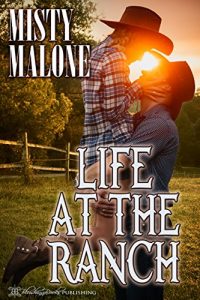 Bo Hamilton had grown up on a ranch, and even went to college to learn more, so when he was hired as the foreman for a rather large spread, he felt up to the challenge. What he hadn’t counted on, though, was the owner’s niece. She was a distraction he didn’t need. He caught his men gazing at her as she flirtatiously applied sunscreen to her long, bare legs, when they should have had their mind on their work. Exasperated, and after repeated warnings, he pulled her over his knee in an attempt to get her to listen to reason.

She was irate, and unfortunately, that only made their strained relationship worse. She was making his job, and life, difficult. In short, she was driving him crazy.

But when the sheriff showed up, thinking he had evidence of Bo committing a crime, it was Alicia, of all people, who stepped forward and pointed out discrepancies in the evidence, keeping him out of jail – for the time being, anyway. From that point on, life at the ranch was different. Different, but never dull.

Get Life at the Ranch by Misty Malone at Amazon