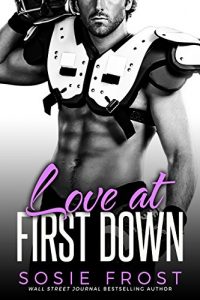 Star professional quarterback Jack Carson has the worst reputation in the league. He’s arrogant and gorgeous, and if he’s not in bed with a new woman, he’s sleeping off the party in a jail cell.

But now he’s gotten in trouble too many times and needs my help to protect his career. As his publicist, I’ve hidden his dirty exploits and silenced the sexy rumors…but I missed the hottest scandal of the year.

Apparently, Jack and I are dating.

When the trouble-maker lies to the league and claims we’re in a committed relationship, he jeopardizes both our jobs. I can’t trust the tattooed bad boy, but now I’m stuck defending him. I have to make him seem respectable—no matter what.

But his shameful reputation isn’t fixed with a few photos of us on a date. With the league determined to expel him for bad-behavior, Jack has only one option to convince them he’s wholesome, dependable, and responsible.

And he’s chosen me to give him the baby.

Get Love At First Down: A Secret Baby Romance (Touchdowns and Tiaras Book 2) by Sosie Frost at Amazon