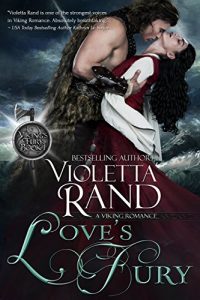 From one of the greatest voices in Viking Romance comes an exciting new series!

Caught between duty and passion…

After losing a drinking wager with his eldest brother, Konal the Red finds himself drafted by the Danish prince and fighting in Northumbria. Once his military contract expires, he intends to return to Norway where he belongs. But his exploits have earned him respect, lands, and a few enemies. Rewarded with a Saxon beauty who inspires more than simple passion, he’s determined to win her trust and body.

Caught between a heart locked on revenge and seduction…

Silvia, the only child of the church undersecretary, vows to avenge her beloved father after he’s killed in a siege. It doesn’t matter which Viking wielded the axe—an eye for an eye is the only thing that will satisfy her. When Konal claims her as a spoil of war, she sees it as the perfect opportunity for revenge. She never expects to discover a pure heart buried beneath Konal’s barbaric exterior.

As Konal slowly rekindles a spark of life inside her, their fates become hopelessly entwined. Not only must they withstand the violence of the envious lust-mongers who threaten them, Konal and Silvia must choose what’s most important—tradition or love that cannot be denied.