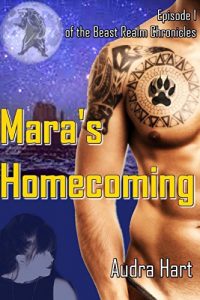 Mara Aphrodisios Montgomery was born a bear, a Greek Werebear to be exact. She was lucky enough to find her fated mate, Logan Montgomery, a Celtic Wolf Shifter. But Fate was fickle and it all went up in a blaze of prejudice and hatred.

Thirteen years ago unspeakable acts of hatred and cruelty ripped Mara’s whole world apart, leaving her shattered and alone. Now Destiny and a few meddling “gods” are conspiring to give her a second chance at the fate she was created for….

Soon our fated mates find themselves neck deep in the newly formed Beast Realm with enemies stalking from all sides. Can these two lovers recapture the life they believed lost forever? Or will Fate once again destroy their dreams?

This is the first installment of Mara and Logan’s epic story.

WARNING: This book contains adult language & graphic intimate scenes as well as references & descriptions of past abuse that may be a traumatic trigger for some readers.

Get Mara's Homecoming: Episode One of the Beast Realm Chronicles by Audra Hart at Amazon