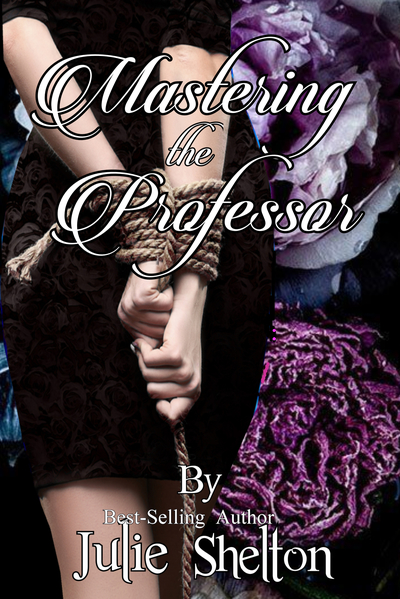 Mastering the Professor by Julie Shelton

Gage Rutherford is the perfect embodiment of a Dom, his raw sensuality and blatant masculinity giving him an appeal that Emma Burke can’t ignore. Unable to resist his allure, she allows him to pull her into his world of hard-core BDSM, with emphasis on the S/M. At first, at Gage’s insistence, it’s just sex. Sadistic, kinky sex. Hot, passionate sex. Whenever and wherever he demands it—in her office, on the dining room table, at the Renaissance Fair, in his dungeon. Just sex. Because he has no use for love or romance. Devastated by his ex-wife’s betrayal, he’s sworn never to be vulnerable to any woman. Ever.
But he quickly realizes that Emma is not just any woman. So, what happens when exquisite physical passion tangles with long-suppressed emotions? What happens when “just sex” exposes all those hidden hungers and needs and soul-deep yearnings? What happens when Emma’s growing love for Gage smashes against his desperate need to deny his growing love for her?
Will they survive the destruction?

For joining the author’s email/newsletter list you will get:
Taken in Her Office, Book One of Mastering the Professor

All information was provided by the author and not edited by us. This is so you get to know the author better.