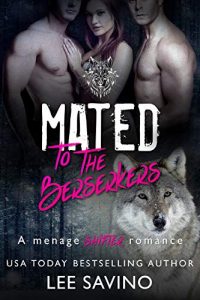 A Highlander and Viking claim their woman…

For over a hundred years, the Berserker warriors have fought and killed for kings. There is but one enemy we cannot defeat: the beast within.

A witch told us of the one who can save us–a woman marked by the wolf. We found and claimed her. But will she accept us as mates? Can she soothe our feral nature before it is too late?

Highland werewolf Daegan never expected to defeat the curse of his bloodline. But when a prophecy tells of a woman who might cure his Berserker rage, he and his Viking warrior brother will stop at nothing to claim her.

They bring her to their mountain home and train her according to pack rules. She is their captive; they will never let her go. For only she can save them before the Berserker curse destroys them all…
*

A dark fantasy romance… Mated to the Berserkers is a standalone, full length, MFM ménage romance starring two huge, dominant warriors who make it all about the woman. Read the whole best-selling Berserker saga to see what readers are raving about…