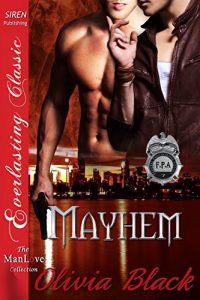 [Siren Everlasting Classic ManLove: Erotic Alternative Paranormal Romance, M/M, vampires, HEA] You have to be the best to go to war with the worst. That’s the motto the agents of the Federal Paranormal Agency live by. They train hard to hunt down those that go rogue, enforcing the laws set down through the ages. They deliver justice to those that break the law and save the innocent. They are the enforcers of the paranormal world. Dylan Aldian is a vampire and an agent with the FPA. When the Silver Bullet, a club in New Orleans, is bombed, Dylan is sent to investigate. He meets Emmett Flowers, a human FBI agent who also happens to be his True Match. Although he wants to claim Emmett, Dylan knows that finding the person responsible for the bombing is their first priority. When there is a second explosion, tensions begin to rise around the city. All of the evidence points to terrorism, but something isn’t quite right. Dylan and Emmett work together to find the evidence they need to stop the fear and violence from escalating. But when tragedy strikes once again, Dylan must make some hard choices in order to save the life of his True Match. ** A Siren Erotic Romance

Get Mayhem [Federal Paranormal Agency 7] by Olivia Black at Amazon