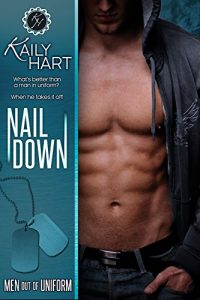 Ward Andrade. Former Navy SEAL. Reluctant hero. Moody loner. Spectacular in the sack. At least, he had been before the only life he’d ever wanted chewed him up and spit him out. Now? Who the hell knew? It’s been three years and he’s still taking one day at a time.

Quinn Devlin. Old money. Unapologetic optimist. Complete klutz. Self-confessed black sheep. At least, that’s how she’s felt her entire life, especially by the people who mattered most. Now? Who cares? After years of battling her family, she’s finally living life her way, on her own terms.

Bookish and clumsy weren’t attributes Ward normally went for in a woman, but for Quinn, he’d make an exception. Quinn didn’t usually get the hots for banged up, surly bad boys either, but when Ward looks at her with those dark, tortured eyes of his, she can’t do anything else.

Ward is used to pushing people away, but that doesn’t work on Quinn. Besides, she makes him laugh. A first. She’s everything he never knew he needed and nothing he deserves, but… He could be hers. For good. All he has to do is let her close.

** Each book in the Men Out of Uniform series is a stand-alone romance. No cheating. No cliffhangers. Always a Happy Ever After. **