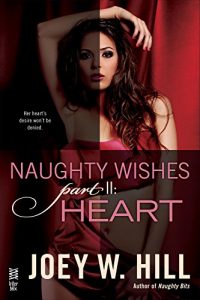 The award-winning author of Naughty Bits returns for the second installment of Naughty Wishes as a daring woman invites a man she loves to make the next move in a bold and sensual game for three players.

Samantha and her roommates Geoff and Chris have always loved each other. But Sam’s always wanted to turn their casual intimacy into something more. And she wants it from both men. When Sam took Geoff to the Naughty Bits erotica shop, she realized his dominant desires were just as strong as her submissive fantasies—if not stronger. But for Sam, being claimed by just one of the men she loves isn’t enough.

Now it’s time for Sam to draw Chris in, and convince him that her master/sub relationship with Geoff doesn’t exclude him. Far from it, in fact. When Chris finally sheds his inhibitions, the possibilities between the three of them go farther than she ever expected. Because Chris’s sexual nature is so overwhelming and unpredictable that he is more than prepared to take their game in an unexpected new direction.