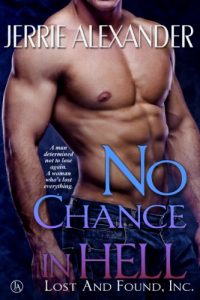 After a drunk driver killed Marcus Ricci’s wife while he was deployed in Afghanistan, he closed up emotionally. Working at Lost and Found, Inc., he lands a puzzling case with too many missing pieces. A killer is closing in on the woman Marcus is supposed to protect. Guarding the beautiful Chris is his job—and he’s one of the best—but keeping her close without letting her inside, makes it hard to protect his heart.

A murderer took the only family Chris Holland had left. When her sister’s killer comes after Chris, she turns to the Lost and Found agency for help. As she and Marcus Ricci dig into her background, they’ll discover surprises that shake everything she believes to be true about her past.

Forced together day and night, passion ignites, and Chris falls for Marcus. He’s a loner and not interested in a permanent relationship. When her case is over, he’ll go back to his solitary life. Just a man and his dog.

Get No Chance in Hell (Lost and Found, Inc. Book 3) by Jerrie Alexander at Amazon