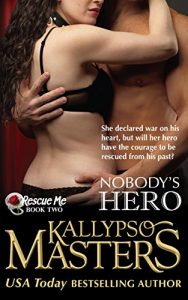 Have you ever fallen in love with the wrong person—or the person who feels he or she is wrong for you?

NOBODY’S HERO is the continuing romantic journey of Adam and Karla, which began in MASTERS AT ARMS & NOBODY’S ANGEL.

Retired Marine Master Sergeant Adam Montague has battled through four combat zones, but now finds himself retreating from Karla Paxton, who has declared war on his heart. With a significant age difference, he feels he should be her guardian and protector, not her lover. But Karla’s knack for turning up in his bed at inopportune times is killing his resolve to do the right thing. Karla isn’t the young girl he rescued nine years earlier—something his body reminds him of every chance it gets.

Their age difference is only part of the problem. Fifty-year-old Adam has been a collector of lost and vulnerable souls most of his life, but a secret he has run from for more than three decades has kept him emotionally unable to admit love for anyone. Will Karla be able to break through the defenses around his heart and help him put the ghosts from his past to rest? In her all-out war to get Adam to surrender his heart, will the strong-willed Goth singer offer herself as his submissive and, if so, at what cost to herself?

ABOUT THE RESCUE ME SAGA: The books in the ongoing Rescue Me Saga are not stand-alone stories and should be read in order. Characters will recur in later books to deal with further issues in their lives as the saga continues and each book builds upon all previous ones. Sometimes main characters even need another book to help resolve major issues affecting their relationships.

BONUS MATERIAL in this version: Kallypso Masters has added the PLAYLIST of music that inspired her as she wrote about the first three couples mentioned in this combined volume, as well as a GLOSSARY OF TERMS and a CAST OF CHARACTERS in these books in the saga.

CONTENT WARNING: Intended for mature adult readers not offended by profanity and graphic (but never gratuitous!) sex scenes. Due to the emotional way in which the author presents the subject matter (past and present), the books might cause triggers while reading. Please read the Author’s Notes at the beginnings of each book before reading further.