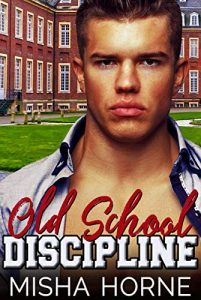 A slacker with a record and a bad attitude. A no nonsense bully with a very firm hand. A dorm room that can barely contain the heat.

I never planned on continuing my pointless education. But then I got arrested. Again. Hey, if those laptops weren’t meant to be stolen, they should have been locked up better.

Somehow, my latest stunt and lousy attitude landed me in Redwood Academy. An exclusive university where they’re supposed to turn screw ups like me into upstanding citizens. Or some crap like that. But, okay, fine. Some lame private college still sounded better than jail. It’s not like I’m footing the bill.

So, what’s the problem?

Well, let me name a few. The dean’s got it out for me, because I might have broken a fairly big rule on day one. Gotta make an impression, right? The troublemaking twink across the hall is obsessed with me, and his overprotective boyfriend doesn’t like that very much. What can I say? It’s hard looking this damn good.

And then, there’s my roommate.

Bax is a complete psychopath. An obnoxious, dominating bastard, with a vicious sneer and massive biceps, and a past no one will talk about. I hate him like hell. Except when I don’t. When he uses those strong hands to punish me in ways I’ve never dreamed of, hate is the last thing on my mind.

Oh, did I forget to mention the spanking? See, Redwood’s all about the old school discipline. And, apparently, so am I. Because getting bent over and spanked by my roommate is pushing buttons I never knew I had.

Any normal person would be planning a jailbreak, I guess. Believe me, I’m tempted. But I’m starting to think I might actually belong here. Even worse, that I might want to belong. To Bax. And that’s definitely a problem.

Old School Discipline is a 107,000 word enemies-to-lovers romance novel about two angry roommates who can’t stand each other and absolutely refuse to believe they could be perfect for each other. No matter how much they like fooling around.

Get Old School Discipline by Misha Horne at Amazon