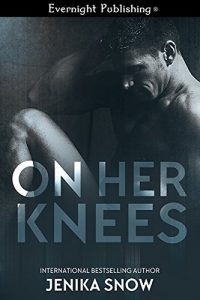 Karina has never considered herself one of the svelte, beautiful women that could capture a man’s attention, especially not the one man she’s lusting after. Viktor Port is many things: arrogant, demanding, and wealthy. But he’s also her boss, and she knows there will never be anything between them.

Viktor has to be ruthless when it comes to getting what he wants. He’s never had to try to get a woman–until Karina. He’s not ashamed to admit that for the last year he’s been obsessed with her. Her timid and naturally submissive demeanor makes him hard, and has him fantasizing about her on her knees in front of him. He knows he can’t ignore what he feels. He has to have her, even if it’s only for one night.

When he finally has her in all ways, Viktor realizes he can’t walk away. She’s his, whether she realizes it or not.
**Standalone story. Approximately 25,000 words long.**

Get On Her Knees by Jenika Snow at Amazon