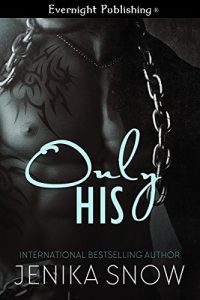 There’s only one man Gillian’s loved, and it’s the man that used to be married to her mother. The years have gone by, and her relationship with David is closer than ever. But what she wants from him she knows she can never have.

David stopped Gillian from getting assaulted seven years ago. After that his feelings for her changed into something dangerous. He loves her, would do anything for her, even if that means following her and making sure she’s safe.

He isn’t ashamed in what he does, because it’s all in the name of love. But when another man takes an interest in Gillian, David knows he can’t stand by and let that happen. But when Gillian finds out David’s all but stalking her, can he stand the thought that she may want nothing more to do with him? Will the betrayal be too much for her?

Get Only His by Jenika Snow at Amazon