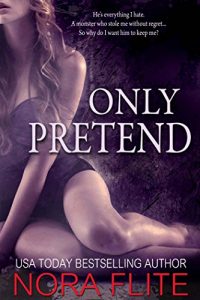 If you wanted to prove that you could change, how would you do it?

I had a plan. I also had no family, no friends, and definitely no jerk of an ex-boyfriend who thought I was boring.
I was tired of being me.
In Vegas, I could be anything.

And then I saw him.
His hungry smile wanted a taste of the new me.
Only a boring person would have said no.

It was reckless to follow a stranger to his bed. Dangerous to take the drink he handed me. I thought the worst regret I’d have would be a hangover, a walk of shame through the hotel.

Except I didn’t wake up in the hotel.
Or in Vegas.

I doubt my face will end up in the news. “Woman missing,” the headline would say. “A stupid person who thought she could be someone else.”

I’m not someone else. I was only playing pretend.

Too bad he was playing for keeps.

–Author’s Note– This is a dark romance novel, it contains themes of violence and mature situations that could make readers uncomfortable.

Get Only Pretend by Nora Flite at Amazon
Get Audiobook