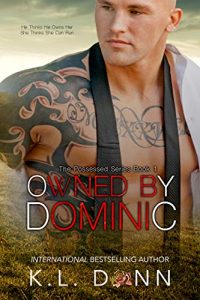 own /ōn/ – verb
have something as your own or possess

Him
A life made of ruthless decisions and a demanding career made Dominic Slade a cold man living in a world of gray. On a mission to eliminate a drug trafficker in Ireland, he meets his match—in an 11-year-old girl. She opens his eyes to the light in the world with her sassy mouth and lack of fear.

It’s just too bad she’s the daughter of his target.

Her
One moment in time and her life is ruined. At six years old her world is shattered, all illusions of safety tossed out the window. With her Mam gone and her Da ignoring her except to scold her, Deidre O’Connor finds a companion in the tall scary man hired to be her bodyguard.

Confusion and bitterness soon engrain themselves in her heart until she fights back and runs.

Them
On Deidre’s eighteenth birthday, she runs away in search of her place in life.

On her eighteenth birthday, Dominic is sent to find her. Never expecting the little girl he used to know to have sprouted into a gorgeous, vibrant woman.

When the sins of the past come back to haunt them, are they strong enough to fight together or will they be left in the cold…alone?