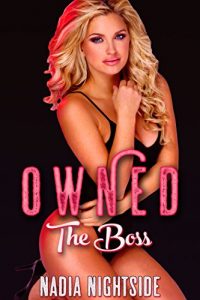 “Make them all kneel, Sir. Please?”

Hauntingly gorgeous Maria has completely and willingly aligned herself to service to Robert’s will. He’s not a rich ultra-stud like she always thought she’d fall for, but he does have one thing going for him—nigh-omnipotent power that makes her panties soak like nothing else. With a touch, Robert can change the minds—and the bodies—of any woman he likes. If the luscious-bodied Maria had her way, this would mean that every hot-bodied babe he encountered would become his fertile, eager, totally-dominated lovedoll, , including their boss Joslyn. She’s a grief-ridden, middle-aged alcoholic, but Robert can transform her with ease into a bubbly, busty twenty-something sexpot with a mind dedicated to his erotic service.
But, as much as it turns Maria on to see Robert use his sensational powers, he still has his doubts. He knows it’s wrong to control others like he can, and resists the advances of Maria as much as possible. But when the succubus Maria is cooing in his ear about how right it is for him to rule over others and enforce his will, he can only resist for so long. Robert will either give in to his dominant tendencies…or he’ll break entirely.

Get Owned: The Boss (Bare Body Lust Book 2) by Nadia Nightside at Amazon