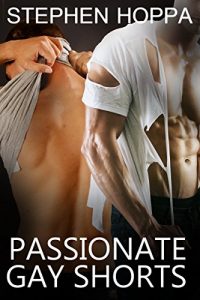 A collection of thirteen sexy shorts that aren’t just sensual: they’re packed with emotion and feelings between two (or more!) men. This bundle includes:
Coming Back for the Cowboy
Greg came back from the military changed. His training gave him a tight, muscled body that would turn anyone’s head, but he’s only ever had eyes for one man and he’s ready to tell him. Chris is just a hard riding, cursing cowboy who doesn’t want his life changed, but Greg isn’t going to let him deny what he really wants.

Hold On To Me
Jack isn’t afraid of his billionaire boss’s raw sexuality—he’s afraid of falling in love with the sweet man under all Trey Cooper’s domination and control. He can’t ignore the tension any longer, and he’s faced with a question: should he give in to everything Trey wants from him, or protect his heart and leave forever?

Fugitive Hearts Trilogy: Under the Sheriff, Drawn to the Sheriff, and Possessed by the Sheriff
Chet has felt those dark eyes on him for weeks, waiting for him to slip up, to give something away. But it’s not Sheriff Weston’s investigation that’s getting to him, it’s those eyes, and those hands, and the desire that’s begun to consume every thought in his mind. When the Sheriff finally gets him in handcuffs, it could be Chet’s last moment as a free man, or it could be the beginning of an entirely different kind of punishment. Either way, the Sheriff is going to open him up to feelings he never thought possible and teach him how stupid he really is.

Mine
Kris’s wanted Caleb since the moment he first met him, wanted to be dominated by his massive bulk and his jet black eyes. But Caleb’s been keeping too many secrets to stick around the small mining town for long and he’s gotten too close to Kris for his own safety. Kris has one night, one chance, to get Caleb to stay, but will telling him he loves him be enough to get him to stay or is Kris just in for one night of rough fun and a lifetime of heartbreak?

My First Time In Space
The military has always been problematic for Adrin. Now that he’s stuck on a four month space voyage with the sexiest, most infuriating man he’s ever met, his life has gotten a lot more complicated. Just as the sexual tension between the two soldiers reaches it’s climax, disaster strikes their ship and Adrin’s problems shift from hiding his sexuality, to staying alive.

More Than Friends
Tyler has a body that makes all the small town women flock to him, and an innocent smile that makes them swoon. Cliff has a thousand reasons to keep his feelings for Tyler a secret, but when one look from his best friend sends him crazy with lust, it might prove impossible to keep his secrets, or his hands, to himself.

Buck Naked in the Barn
Five bodies writhed and moaned in the loft as the wedding carried on below. All Travis wanted was a night of anonymous pleasure with two gorgeous men that would help him forget his ex. But he discovers his ex is getting busy with another man in the exact same loft. The night spirals out of his control as he finds the desire of the two dominating cowboys to be difficult to control as they’re used to riding hard and rough.
In the end, Travis experiences a night of earth shattering pleasure like he’s never imagined and an emotional experience that will leave him questioning everything he thinks is true.

Submitting to my Rival
Max has never submitted to anyone before, let alone the cowboy who’s bested him at everything. Jed is determined to make Max see him as more than just a rich snob, but first he’s determined to get him into bed and experience the pleasure of submission.