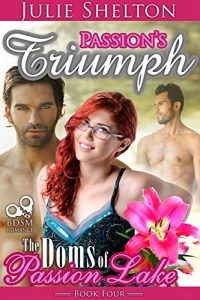 Former SEAL Dr. Lucas McKay and his brother Alex, former FBI agent, have been looking for their lifetime submissive. And they may just have found her in Lily Prescott, the new Director of the Passion Lake Library. She’s sweet, curvy, and submissive. And she has a secret. But it’s not that she writes steamy BDSM romances in her spare time. It’s that she’s a virgin who has never done any of the kinky stuff she writes about.
When these two alpha males discover this, they offer to act as her temporary Doms, giving her experiences she can use in her writing to make her D/s scenes more authentic and emotional. Since she’s as attracted to them as they are to her, she agrees.
Unfortunately, a cult of ultra-religious zealots have targeted Lily in their anti-porn campaign. Meanwhile, a vicious mob assassin, has just escaped from prison, and is coming to kill the man who sent him there—Alex. Will death triumph? Or will love?

Get Passion's Triumph (The Doms of Passion Lake Book 4) by Julie Shelton, Jillian Myers at Amazon