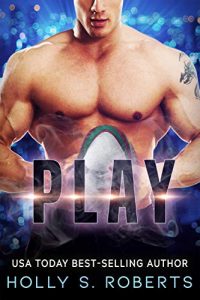 When Killian MacGregor, the hottest quarterback in the NFL, eyes the perfect pair of female legs, he spends an hour tracking the gorgeous woman in a room filled with rowdy teammates until one gets out of line.

Rebecca Cavanaugh, a long distance runner for the state team, intimidates boys and men with her quick wit and majestic height. The pre-season jock party isn’t her scene, but she’s roped into attending to provide her sister a sober ride home.

Hiding in the kitchen to avoid an athletic sex fest, a drunken football player forces Rebecca to her knees, and thrusts his crotch in her face. Before Rebecca can extricate herself from the demeaning situation, an unknown champion saves the night. When Killian assists Rebecca off the floor, she’s stunned into silence while staring at the sexiest man alive.

This book contains adult situations and more balls than a girl knows what to do with.

Get Play (Completion Book 1) by Holly S. Roberts at Amazon