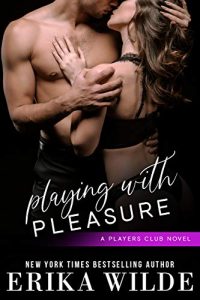 PLEASURE HAS NEVER BEEN SO DECADENT . . .

Paige Moore has a fulfilling business designing couture corsets for her high profile clientele, but her love life is sorely lacking. Being burned in the worst way possible by Sawyer Burrows has left her guarded and wary when it comes to men and their motives. When her best friend presents her with an invitation to The Players Club, she embraces the chance to enjoy a hot night with a stranger, and finally put her past heartbreak, and Sawyer, behind her.

Sawyer knows he devastated Paige with his careless actions a year and a half ago, and he’s lived every day since with those regrets. Now, seeing Paige at The Players Club, he knows this is his chance to make amends and prove that there is still something between them worth pursuing. If sensual pleasure is what Paige is looking for, then he intends to be the man to spend the night seducing every part of her.

Paige’s surrender is Sawyer’s ultimate goal, but once her desires are sated, will she give them the second chance they deserve?