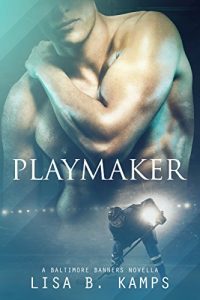 This 36,000-word novella was originally released in 2016 as part of the Seduced by the Game Cancer Charity Collection.

Derek Caulton is well-known for his exceptional speed and skill on the ice. His natural ability to read the game and create scoring chances has made him a valuable playmaker for the Baltimore Banners, but his skill off the ice is a little different. Coming from a world of privilege with a devilish charm and fun-loving spirit, responsibility isn’t something Derek’s ever had to worry about. And he’s not accustomed to working for what he wants. That all changes after a single encounter with Bridget Lloyd.

Fiercely independent and entirely too outspoken, Bridget learned early in life how to work–and fight–for what she wants. After struggling with the loss of her mother at an early age, she’s worked her way through college with the goal of becoming a social worker who specializes in working with children. As a member of the Banner’s Ice Crew, she’s familiar with Derek’s play on and off the ice and wants nothing to do with the irresponsible, fun-loving player–until a minor accident throws them together.

Can a one-night encounter really change the course of two lives? And when the tables are turned, can one stubborn woman teach the fun-loving playmaker that responsibility isn’t a four-letter-word and sometimes it’s what happens behind the scenes that matters most?

Get Playmaker (The Baltimore Banners Book 0) by Lisa B. Kamps at Amazon