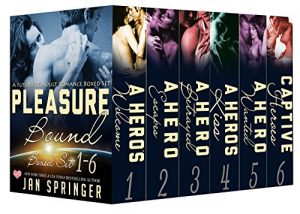 During a top-secret mission to explore a newly discovered planet the Hero siblings are thrust into a sensual world of intimate fantasies, pleasure-pain, violence, unconventional romance and sizzling sex.

Being shot and held captive isn’t what astronaut Joe Hero had in mind when he agreed to a top-secret mission to explore a newly discovered planet for NASA.
But a man would have to be dead not to fall for the sensual female doctor in charge of his care.
One night of scorching passion in the arms of the stranger from another planet is enough to convince Dr. Annie there’s more to males than she’s been taught by the Educators…

Queen Jacey has always fantasized about bedding a male.
But taking one for her enjoyment is strictly forbidden. That is, until well-hung Ben Hero forces her to overcome her training and her beliefs…

Astronaut Buck Hero didn’t count on being held captive or becoming infected with passion poison. If he doesn’t get the cure soon he’s going to be one very dead man.

Fugitive on-the-run Virgin has just rescued an infected male and needs to administer the cure – a twenty-four-hour sex marathon. Then she’ll turn him over to his enemies in order to gain her freedom.
But her well-laid plans go into orbit when she discovers she’s fallen in love with the stranger from another world.

During a secret NASA mission to locate their brothers on the faraway planet of Paradise, the Hero sisters become separated after they crash land…and find unexpected romance with tormented male warriors.

Jarod and Piper
Being injured and infected by sensuous swamp water isn’t what Piper Hero signed up for when she agreed to search for her three missing brothers. But when she’s rescued by a dangerously sexy man who makes her so hot that she can’t even think straight, Piper is glad that she came.

Jarod Ellis has sworn off women. But he’s captivated by Piper Hero, a woman who claims to be related to the Earthmen he vows to protect with his life. Although he mistrusts her, she sets free a carnal inferno of needs he’s never experienced during his previous life as a pleasure slave.

Despite her intimate fantasies coming true, Piper knows she needs to continue her mission of reuniting her siblings and she’ll do it-with or without the help of her well-hung stud…

After years of being away from his pretty-plus sized ex-girlfriend, Sully’s back on Earth and his hometown. When he discovers Jenna wants to explore her sensual side, he knows he’s the only man who can make all of Jenna’s sizzling-hot fantasies come true…

During a secret mission to locate their brothers on a faraway planet, the Hero sisters become separated after they crash land…and find romance with the tormented alien male warriors of the species in this ultra-long scifi book.

Taylor and Kayla
While searching for her brothers, Kayla Hero is bound and imprisoned by the Breeders— along with a male captive whose scars pique her interest. Forced to escape with him, she’s aroused when she suddenly becomes his captive…

Get Pleasure Bound : The Complete Series Books 1-6 by Jan Springer at Amazon