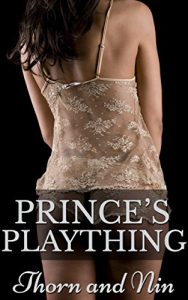 Is falling for a demon really so bad?
Orphaned as a child by a dark plague, Alma was raised to become a nun of the church. Her entire life was devoted to the scriptures, so much so that she had little time to think of anything else. Her dreams of being swept away by a dashing prince were nothing more than childish fantasies, after all. The nuns saw to that when she was little.

Until one day Prince Faron appears at the churches gates, looking for a personal servant to become his plaything. To Alma’s horror she was chosen, and he wouldn’t take no for an answer. Faron has more than just cleaning in store for the young maiden, and as she soon learns he hides a dark secret within himself, one that the church would kill him for.

Will Alma fall to the dark prince’s desires, teased until she can no longer resist the pleasure? Or will she escape his influence in the heat of passion, unable to be tamed by his demonic touch?

Get Prince’s Plaything by Thorn and Nin at Amazon