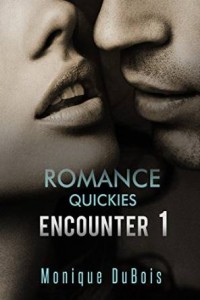 ELLA’S STORY: In QUICKIES (Encounter 1), curvy girl Ella meets a sexy cop whom she seduces on the floor of her bakery. But will his big gun be enough to keep her interested?

WHO WILL WIN THE BET? WILL ANY OF THE WOMEN FALL IN LOVE ALONG THE WAY? FIND OUT BY READING THE NEXT INSTALLMENTS OF ROMANCE: QUICKIES.