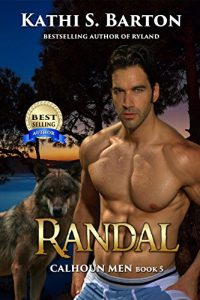 Randal loved teaching at the elementary school, but there were a lot of underprivileged children attending and it tore at his heart for them to do without, especially at Christmas. Donating food to all the families was his way of helping make their Christmas brighter.

Randal hadn’t expected a parent to take exception to his Christmas present and wield a gun in his direction much less use it. What was this world coming to?

Laney Price had only planned to pick up her sister, Heather, from the Calhoun’s care and head back to Las Vegas. Everything was so messed up and nothing was going as planned. Her stepmother and her father were coming to take the child and there wasn’t much she could do about it. No child deserved to be put into their care.

Randal knew Laney was his mate, and he couldn’t stop her from leaving, but he was going with her if she left. He wouldn’t force her to claim him, but he had a solution to her problem if she’d agree to it.

Get Randal: Calhoun Men by Kathi S. Barton at Amazon