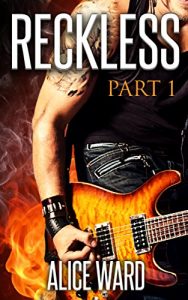 This is the first part of RECKLESS – a five part steamy new adult series by Alice Ward.

Even the best laid plans can be derailed.

Andrea Mercer had her entire life mapped out—everything from her career as a top journalist to her future CEO husband, white picket fence, and two-point five children. All she had to do was make it to graduation—three more months—and that perfect life would begin.

But Andrea isn’t immune to the life-altering forces that can derail even the best-laid plans… In Andrea’s case, that force is Jace Richardson, the tattooed sexy rocker god on campus. Cocky, suave, and chauvinistic, Jace is everything that she can’t stand in a man. But it’s either cover the story on Jace’s band, Reckless, or lose the one thing that matters to her the most: her position at the campus paper. Only, as she begins to work on the column, Andrea learns that there’s more to the campus god than meets the eye.

Will Andrea be able to hold onto her dreams for the future as the sexy vocal guitarist flips her entire life upside down? Or will Jace light a fire in her that she never knew existed?

The RECKLESS Series is intended for a mature audience, 18+ only.